Seeing the forrest for the trees 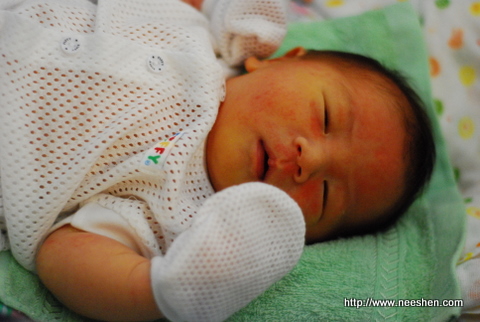 Inside that mitten, Gabriel is showing me the finger for forcing him out of the mother’s comfortable womb..

You will notice that some time has passed since the Caesarian section the wife has to endure before I posted it up in the blogs. In between, I have told my story to a few close friends. I told them that I was in the operation theater when the doctors did the operation and I narrated what happened real-time to the wife who is conscious. Most people tell me that I was brave to be there. A lot of daddy’s think they are brave but when the see the amount of blood coming out, they literally faint.

After the wife has been prepped for the operation., she was wheeled in to the operating theater. She went in first cause she was on the wheelchair (not like that she cannot walk, it has to be a dramatic effect – unless someone can tell me why). The nurses asked me in a fast tone whether I want to go in the operation theater. No hesitation – I sure. One male attendant (or is he a nurse, I did not get his details) ushered me into the changing room, dragged out a green scrub and ask me to change into it. He looks rushed so I just put the scrubs over my day clothes.

Then I was given a chair and asked to wait beside the nurses station in the OT. From the station I can see all the operating room.

I had to wait for about half hour before they asked me to go in the operation room. When I went in, the wife was already covered except for the part where they will operate on. She is conscious and I am given a chair beside her head. The blanket was raised at the neck so she could not see anything beyond her neck. I did the narration.

The Doctor came in. I was surprised that he had those rubber boots that the market people uses but in white colour. That was surprising. The doctor went straight to work. Like literally, came in, put on his gown and gloves and reached for the scalpel. That was 10.25am.

He made a cut, then cauterize the blood vessels. He works fast. Like really fast. After that, he did what I think was separating the uterus from the “meat”. One more cut and the nurses are moving around the stomach. One of them was on the top of the stomach and with all her body weight, pushes down on the stomach.

5 minutes and it is all over.

All the while, I am narrating to the wife what is going on and she said she feels nothing down there. Glad for that.

I did notice that when the baby’s head came out, he already started crying even while the body was in the womb. He was not too happy about being forced out of the mother. As the body is leaving the womb, the butt was facing me and I can see streaks of green goo from the butt all the way down the legs. It looked out of place cause the only liquid I see are blood. I think it has to be poop. Yup, baby pooped when he came out.

Which is a good thing I understand, cause that reduces the chances of jaundice. He needs to poop and we were worried that 1) he pooped in the amniotic fluid and eat his own poop since he stayed there for so long. 2) he did not poop and get jaundice.

For the next half hour, the doctor was stitching up the wife and I was asked to leave half way though the stitching.

Did I see Blood? Yup. I don’t think there was a lot of blood loss but blood was everywhere. Looks like a gruesome murder scene.

Did I faint? Nah.. you will need more than that amount of blood to make me faint. Seen worse.

A little bit more about the masters class

I went to the shrink