The sewing machine that I got from grandma was still working as is. The only thing missing is the table. Some of the establishments are also rusty so I headed down to the sewing machine spare part shop in town to get replacements. There is a shop called Swee Hoe Pomar at the start of Carnavon street, nearest to Komtar. Well, if you can call it a shop because you really cannot “shop” around. You ask the man what you want and he finds it for you. They have spare parts for old sewing machines. So we bought a wooden table. It has to be either Singer brand or some locally made ones. The locally made table tops are bad quality. We can see that the workmanship is bad, some of the parts are not even aligned. The show owner said that Singer don’t actually make the table tops. They come in a set with the sewing machine but he has customers who wants the machine but not the table. That is how he gets the table.

So we went home with a table top and some parts.

Once we reached home, we put singer oil (also bought in that shop) in all the moving parts of the machine. WD40 whatever that we cannot reach with the oil. The machine now runs like new. We then proceed to replace some of the parts and find that they don’t fit!

Worse, the table is too small for the legs… I can still use the table but the legs are protruding out. 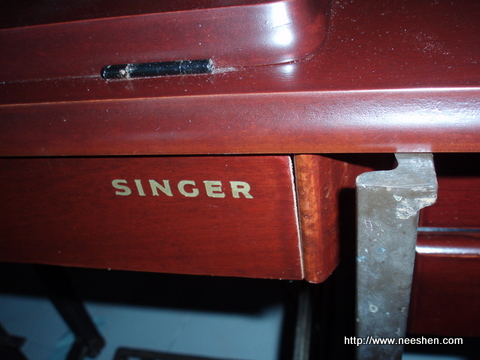 The leather drive belt is also too short.

And even if I can get the drive belt to be longer, it won’t come up nicely to drive the machine. It will always scratch the side of the table where the hole is.

We went back to the shop immediately. Lucky they are open late. I think they stay in the shop so they can open late. I told the lady boss that the legs were too big but we will use it. The belt is too short and some of the parts didn’t fit. There was an old lady who was watching TV in the shop. The shop owner’s mother I come to understand. She quickly stood up said that if the legs don’t fit, then it has to be a very very old machine. I told her it was bought in 1955. Both of them started to smile and became very excited. They say there are very few of those machines left. They do a lot of service and rarely see machines like that coming into the shop.

WOW! Wife says if there is anyone to trust on the value of the machine, they are the ones because they can appreciate the machine more.

We did it.. motor installed.. Tested and working.. the machine and up and running..

now I need a place to put it in the house :D/

At the end of the day, we wondered if buying a new machine would be cheaper. We went to Singer shop in Bayan Baru. A new machine (old fashioned one) is RM700 over. A new electric one is close to RM1K.

So yes, it may be troublesome. I have an oversized legs for the sewing machine table. But it is a working antique and still cheaper than getting a new one 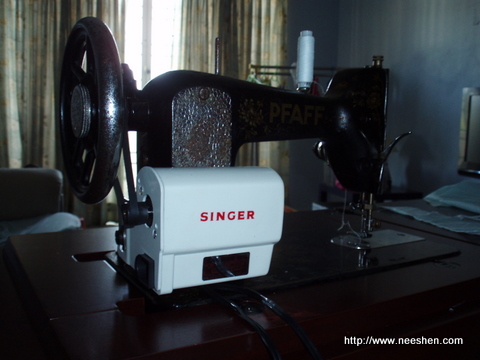 New parts are Singer, old parts are Pfaff… a mismatched pair but they work