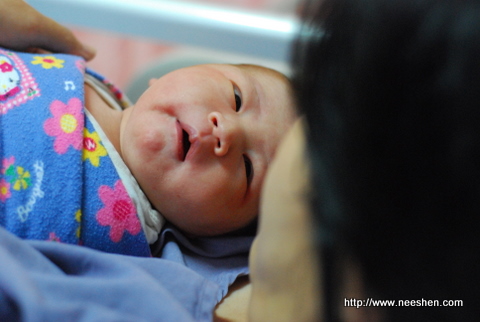 This would be the first time any of us got admitted into a hospital. We were unsure of the process or what is about to follow but we were going to do it together.

The appointment to check into the hospital was at 8.30 am. We walked in a check in just like a hotel. Just go to the counter and mention the name. The person at the counter escorted us up to the wards and passed us to the nurse. In less than half and hour, wife was in her hospital gown and the O&G was with us.

We were aware of some minor complication to the pregnancy. The baby is in a posterior position, making him a bit hard to come out. The head is looking up, causing the baby to be not engaged. Also, suspect there is cord around the neck. The O&G said, cord round neck is something he has handled many times and it should not be a problem.

We were given option.

We can first try to induce the baby for a normal labour. They will give her pitocin every 6 hours for a maximum of  doses. This should induce the baby to come out. BUT, there are unsuccessful cases which ends up in caesarean section anyway.  The other option that we have is to go for elective caesarean and and skip out on the pain.

I was expecting the doctor to tell us what to do, after all he is the expert. But instead we were given the choice. It was a stressful time for us. He explained what will be done for both options and we were given time to think. I really wanted him to make the decision so that I don’t have to. We both made some calls to our experienced mothers and both came to a conclusion that it would be better to skip the inducing and straight go for the operation. The logic, as I gathered, is that inducing will cause duress and stress to the baby. It is better, in such cases, to get the baby out as fast as possible.

We told the nurse about our decision and the Operation was scheduled for 10am.

So you have to imagine,  we checked in all fine at 8.30am. One visit by the doctors and a few phone calls. 2 hours later, the baby is out!

I never buy the stories about how babies are a miracle of life and stuff like that. I think they are mushy. But after seeing the baby coming out from the womb, with my own eyes.. it is a surreal experience.