As I was looking though Google Photos to embellish this site, I was taken on a sentimental trip on what happened in the past few years in my career. So taking a break from writing serious posts on my journey of leadership to look at the trip the symbolizes the happiest moment in my career so far.

This trip happened in early September 2019, with the dedicated team members who went to Ireland for the silicon power-on event. After months of preparation, 2 weeks of 16 hour days in the lab (weekends included), the event was a success. This was the weekend before everyone flies home. Everyone agreed to do something big to commemorate this great achievement.

END_OF_DOCUMENT_TOKEN_TO_BE_REPLACED

Not going to try and write a travel blog post for my trip to UK. I can name many people who has been there or are staying there. No point sharing the places I visit since UK is very popular and information can be obtained easily on the internet. What I am going to write is about the feelings and the culture that I see in UK, then compare it to what I experience in Malaysia. Since I have not really been outside of the country much, I don’t think there is much I can compare to other than Malaysia, so don’t lynch me for using MY country as a comparison. Also, I need to make comparison to put into perspective the culture that I observe in UK.

Lets start with the very obvious, there are memorials for the fallen EVERYWHERE! There is no escaping a statue here, a memory there, some stone markings everywhere in UK. The fallen may have names, they may not have names. What I feel is that everyone who has sacrificed for the country at one time or another will be remembered through memorials. Granted that the United Kingdom has been through a lot of wars and conquest, the amount of memorials are stunning. 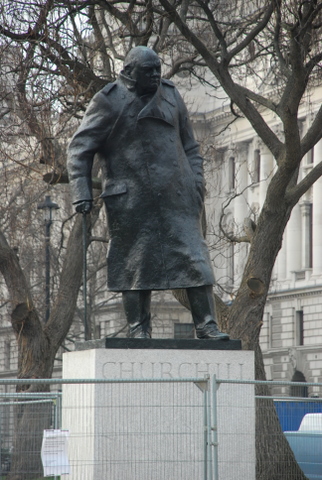 Winston Churchill. Prime Minister during the war. Although he did not die in the war, he has his own memorial. 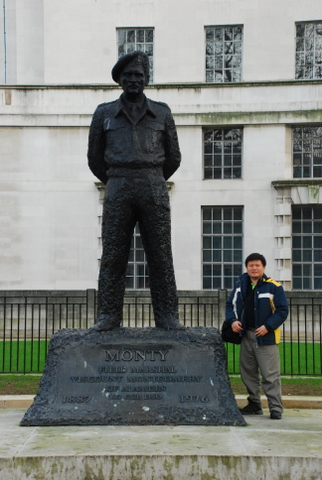 Montgomery, who chased the Dessert Fox out of Northern Africa. My travel companion asked my wife who is he. Wife, with the best of her knowledge, just answered that he is one of the war hero. Actually along this whole walk path, there are a few statues of war heroes. 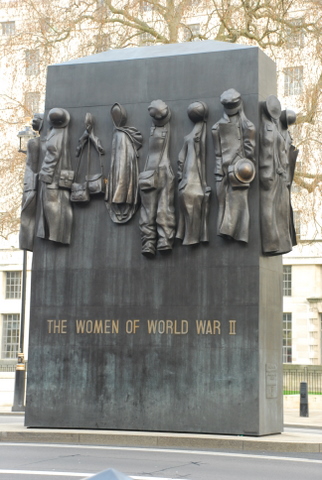 This monument is dedicated to the women in WWII. As most men are drafted into war, women took over a lot of the work used to be done by men. The momument depicts the uniforms representing the kind of work women did during the war. I see this momument and think how they will hopefully hung up their war clothes for good. 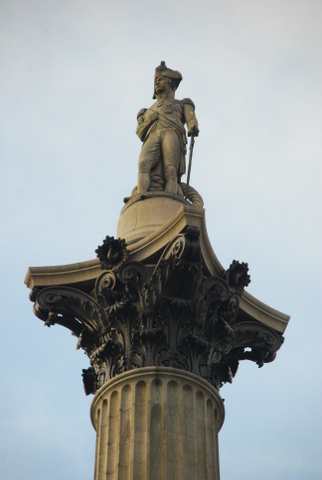 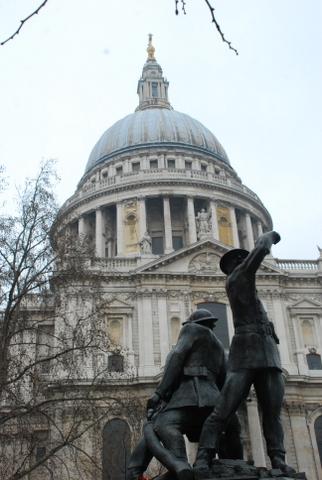 They did not left out the firemen during WWII who helped to save London from the fires and bombing. More interesting is the fact that the monument is located near St Paul’s Catherdal, the church of the nation. This is a memorial for the artillery regiment in world war one. Nicely done piece of art that people like love visit. It is not just a plaque with names on it. It has meaning. 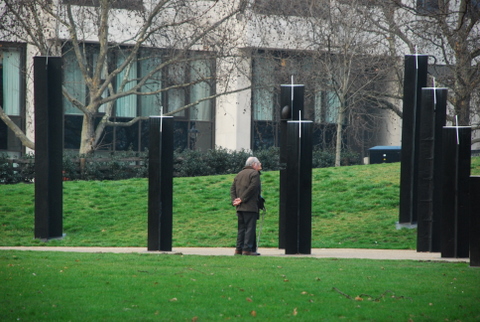 A fairly new installment. From the front it looks like metal bars, but the steel is cut to reveal crosses at the top. Nice installation. 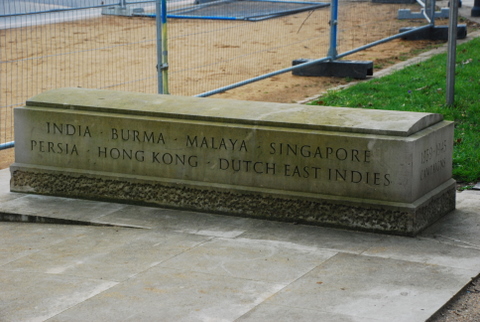 And not forgetting the soldiers who faught in far away lands, like ours.

This is what I noticed. The society, the culture, remembers the nameless people who has served the country. All these memorials are not all funded by the government, a lot of them are funded by the people. So don’t just blame the Malaysian government for doing nothing to remember the Malaysian who sacrificed for the coutry. We as the people need to do more for the people who made this nation what it is. Sometimes we have to swallow the truth that bad things happened during WW2, japanese occupation, emergency, confrantation, May13th. We need to confront these issues and remember the people who fought both sides of the conflict. Everyone is after all, Malaysian.

I remember what the coach driver says, “history is boring because of the way it is taught”.

Who has been to Francis Light’s grave and laid flowers for the founder of the state? At least I can say that I have been once, to the grave of Rev Hutchings AFTER I left school.

We heard the Scottish folk song called “Lock Lomond” when the Australian Trinity Boys Choir came to Penang. We thought that it was a very nice song. The song starts like this

So here we are in Scotland, standing on the bonnie bank of Lock Lomond. Wonderful place. The feeling was surreal. A song unheard of until some choir from Australia, came to Penang to perform a song about a body of water in Scotland.

And finally, there we are. Surreal. 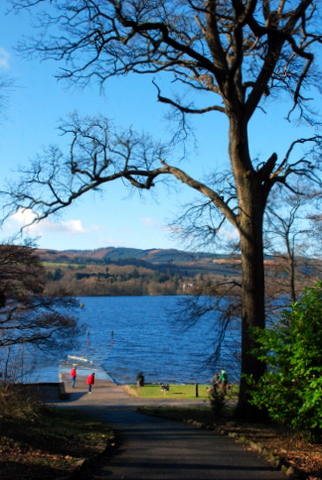 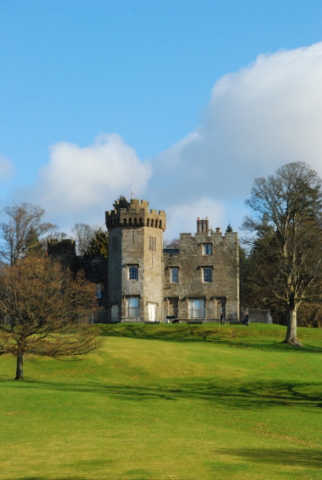 This is the castle near the Loch. I don’t remember the story of the castle or the name but the view was stunning.

Then the song went on to talk about Ben Lomond. Well, Ben is a mountain and it is the second highest in Scotland.

‘Twas there that we parted in yon shady glen
On the steep, steep sides o’ Ben Lomon’
﻿﻿﻿ So Yes, we were in the United Kingdom. I am sticking to my story that we were there for a holiday. But I had to stop over Leicester my MSc class. I signed up for an MSc class from University of Leicester. They had the class in  Penang, sent their teaching staff down to Penang for classes. But I joined 2 classes late, the big bulk of them have “graduated”, leaving about 6 of us stranded. University covered some of our expenditure to continue our studies there in the UK and I took it as a chance for a holiday.

More stories to come I guess.

Know a place by visiting the market. That is what I did. QV market is HUGE. They sell everything there and they are more known for selling souveniers there than your produce. They do have a relatively small wet market which sells seafood and meat. I could have mistaken the wet market for supermarket and wet and anything but.

here are some of the stuff they sell in the wet market. fresh pasta. Like wimpy and fresh pasta. none of those hardened dried thing. This is the real thing! 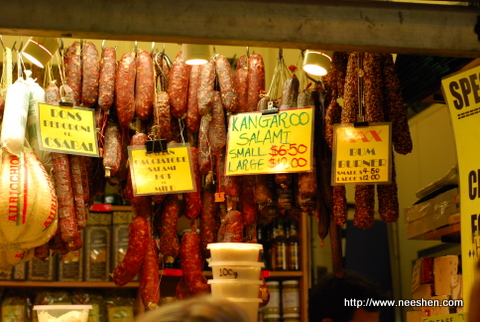 dips of all kinds. I believe this is one of the quirky Australian thing. you buy these dips and you eat them with crackers. cheeses of all kinds. Some shops sells 3 for 10 dollars. We got some. chocolate. Like fresh, if you can call it that, chocolate. Ham and deli of all kinds. this is a typical meat shop.Every cuts of meat there. sausages of all kinds. the fresh one. Not frozen.